5 spots to caffeinate, dine during August

BY ST. LOUIS PUBLIC RADIO – On Monday’s St. Louis on the Air, host Don Marsh spoke with Sauce Magazine’s Heather Hughes and Catherine Klene about new food and drink establishments in the region to try this month.

With three coffee shops on their radar for August, Klene said, “We’re very caffeinated over at Sauce this month.” 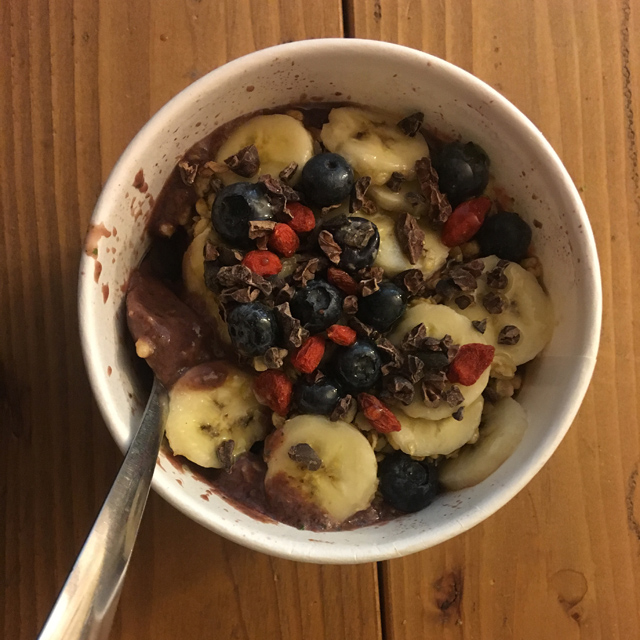 BY BOULDER WEEKLY – This healthnut hotspot only opened a few weeks ago, but, if we’re being honest, we’ve already visited the superfood cafe half a dozen times. Our favorite, so far, is the signature Superfood Bowl: a thick, creamy base blend of açai, graviola, acerola, their signature “VB blend” (an immunity booster made from mangosteen, aronia berry, camu camu, moringa, açaí, blueberry, pomegranate), plus almond milk, kale, bananas and strawberries. On top, granola, banana, blueberries, goji berries, cacao nibs and honey round out the bowl with a delightfully sweet-but-not-too-sweet crunch. Hangovers and sickness be gone. $13.49.

BY NATION’S RESTAURANT NEWS – Long before there were spirulina smoothies, or ginger-turmeric shots, or even run-of-the-mill energy drinks, there was coffee. But as the functional-food market gets more crowded, this centuries-old member of that segment is getting upgrades as restaurants and manufacturers tweak it with herbs, spices, fats and even gases to add to its appeal and purported health properties.

And, increasingly, they’re brewing it and serving it cold.

Cold brew consumption was up by 80 percent in the year ended February 2017 while hot coffee consumption was down by 1.3 percent, according to market intelligence firm Studylogic, based in Cedarhurst, N.Y.

Cold-brew coffee is different from regular iced coffee, which is made by brewing strong hot coffee, letting it cool and then pouring it over ice. Cold brew, by contrast, is made by steeping ground roasted coffee beans in cold water for 12 hours or more, slowly extracting flavor in a way that accentuates sweetness and tones down acidic and bitter notes, making for what its proponents say is a smoother, easier-to-drink beverage.

Cold brew has come on the scene fast, growing by 580 percent from 2011 to 2016, according to Mintel estimates, and since then it appears to have spread even faster, quickly moving from coffee houses to refrigerated retail aisles to family-dining restaurants: Spartanburg, S.C.-based Denny’s introduced it to its more than 1,600 domestic locations in April.

Sharon Lykins, Denny’s senior director of product innovation, said she introduced the drink as a cold accompaniment for breakfast. Although the chain already had an iced cappuccino that sold well, she said it was “a little heavy on the milk end for breakfast.” She said the smoother, somewhat sweeter, cold brew paired well with Denny’s breakfast items, and her guests were already familiar with that type of drink.

“Coffee houses had already educated them on cold brew,” she said. “We’ve had a lot of good comments on that coffee.”

Denny’s cold brew is produced by a supplier in concentrate that is reconstituted in restaurants. Like the chain’s other coffee, it’s all from Colombian Arabica beans that are sustainable-certified.

Starbucks Coffee confirms the rapid rise of cold drinks generally: The Seattle-based chain reports that cold drinks — coffees, teas and non-caffeinated “Refreshers” — now account for more than 50 percent of its sales, up from 37 percent five years ago, even as sales of its iced, blended Frappuccino category fell in the most recent quarter.

“As consumers are becoming more aware of how their food and beverage choices impact their health, we are seeing them choose cold coffee beverages as a replacement for other non-coffee caffeinated beverages, like soft drinks,” he said, adding that cold brew in particular is seen as “a more natural product with clean ingredients and free of preservatives.

“But there are other factors helping to drive the growth we are seeing in cold brew: flavor appeal and craft appeal. Consumers are attracted to it because of its smoother, less acidic taste resulting in a more refreshing beverage than iced coffee. Additionally, the process itself of cold brew, in that it is slowly brewed over hours, taps into the consumer desire for more craft products.”

Peet’s has been selling cold brew in retail since 2016, and in April it introduced nitrogenated varieties, which are packaged with a widget that releases nitrogen when the can is opened and gives the coffee a creamier mouthfeel.

So-called nitro cold brew is now fairly commonplace in coffeehouses and has been introduced at several chains, including many Starbucks locations and at the fast-casual açaí-bowl specialist Vitality Bowls Superfood Café.

Being the trendiest of coffee drinks, cold-brew is evolving rapidly. As nitro cold brew has spread, it has been embellished: Philadelphia-based coffee-house chain La Colombe is now infusing its cold brew latte, available in cans and kegs, with nitrous oxide instead of nitrogen. Also used by chefs who want to create foams, or to keep a steady supply of whipped cream, nitrous oxide binds with the dairy to give it body and imbue the drink with a creamier mouth feel.

Starbucks is taking a different approach, introducing a new Cold Foam to scoop on top of cold brew. Made with aerated skim milk, it was first introduced at the chain’s Reserve Roastery in Seattle, and then to its “reserve bars” throughout North America. The foam floats on top of the cold brew, adding a creamy mouth feel with each sip.

5 new places in St. Louis to try this August

BY SAUCE MAGAZINE – The first Missouri location of Vitality Bowls Superfood Cafe is stepping up the wellness game. Along with the quintessential fruits and veggies (strawberries, bananas, kale, spinach), the cafe also features a variety of ingredients you’re unlikely to find at most restaurants, including pitaya (dragon fruit), camu camu (an Amazonian berry), graviola (soursop) and acerola (Barbados cherry).